A professor from the prestigious State University of California, Berkeley, Joseph Lough, was a guest at the Faculty of Philology on 13 March 2014. On this occasion he gave two lectures to the students of English Language and Literature in the field of American culture: “Gymnasium in a Box” and “American Republicanism: Classical, Revolutionary and Radical”. 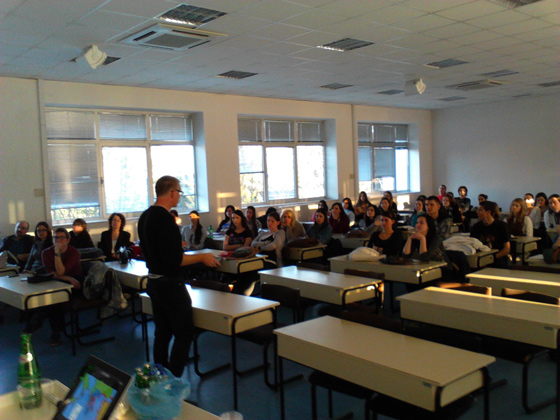 Professor Lough has been teaching the History of Economic Thought and Political Economy at Berkeley for several years now. He is currently working at the University of Tuzla where, as a Fulbright Visiting Researcher and Professor, he is finishing several projects and is teaching English literature. His area of interest includes European intellectual and cultural history, classical Greek theories of politics and economics, and the history of social theory. He is the author of “Max Weber and the Persistence of Religion: Social Theory, Capitalism, and the Sublime” (2006) and “Commonwealth: or Why Democrats are Republicans and Why Republicans are Neither” (2012).